Home About the LF Waterlinieroute

The LF Waterlinieroute lets you ride through beautiful nature areas in search of world-class Dutch heritage sites. The historic Dutch water defence lines were constructed to keep the enemy at bay by flooding huge plots of land. They are unique strings of military structures that have enriched the landscape in a striking way. Water as a means of defence, that’s something only the Dutch could come up with!

The route is 410 km long and takes you from Edam to Bergen op Zoom, along the Stelling van Amsterdam, via the Nieuwe Hollandse Waterlinie and the West Brabant part of the Zuiderwaterlinie. These defence lines have left behind many visible marks in the landscape, such as inundation channels, batteries and defence line dykes. You’ll ride through an appealing scenery of water and exciting nature, past beautiful forts and fortified towns that exude an atmosphere of years past. This tour brings the history of the water defence lines to life! 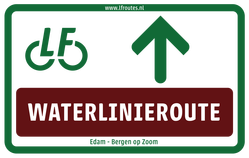 Handy guide and app
The signs along the route will show you the way. We’d still recommend that you always bring along an up-to-date map, though. If you miss a sign or want to deviate from the route, it will help you to orientate yourself. The Waterlinieroute cycle guide features easy-to-read maps. And it tells you the story of this fascinating river. The LF app includes details of the LF Waterlinieroute as well. And also of the ‘Fietsers Welkom!’ establishments and accommodations along the route. The app even tells you the ferry schedules. It can be downloaded for free in the app stores. You can use it to guide you on your ride. Or at night you can read what sights the next day has in store for you.

Feel free
Do you want to deviate from the route? Using the reference point numbers that connect to the LF Waterlinieroute you can ride from a train station to the route, for instance. Or go to your accommodation for the night. Or maybe you want to take a short cut, to visit friends or places of interest that are outside of the route. It’s all possible.

The Netherlands is a great destination for cycling holidays. But what long-distance routes are there and how do you go about finding them? Will you be cycling from a to b, or would you rather cycle a circular route? We are happy to put you on your way. Visit our website hollandcyclingroutes.com for more fun.

Curious about other LF icon routes? Take a look at the offer here.